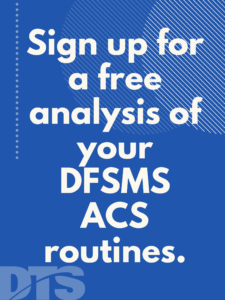 ACS Quality Assurance – SMSDEBUG also contains an ISPF-based ACS test facility called ACS/QA. This facility can be useful in testing ACS routine execution and in performing regression testing when changes are made to the ACS routines. ACS/QA can be used to determine what the output of the ACS routines will be (including messages and exit codes), and can provide a side-by-side comparison of different pairs of ACS routines residing in different SMS control data sets.

ACS/QA provides a number of advantages over the native ISMF test facilities, making ACS routine testing much faster, more accurate, and more practical. These include:

No Rules Language – Unlike most of the other DTS Software products, SMS/Debug does not require any installation setup or product configuration.

ACS/QA ISPF Interface – ACS/QA test cases can be created, updated, and executed from an ISPF interface. The ISPF interface allows the user to define new test cases in a testcase library, select desired test cases to view or alter, or interactively execute one or more test cases. 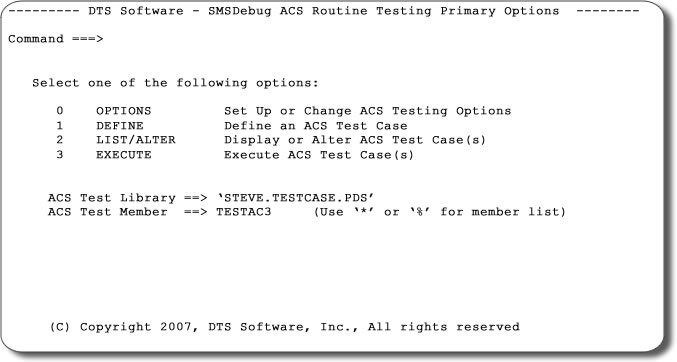 Maximizes utilization of the SMS environment

The marketing literature is available to all visitors. The product manuals are only available to registered customers and companies trialing DTS products – login is required. To request authorized access, please complete the Registration form. DTS customer support will review your request. Upon approval, you will receive access notification by E-mail within one business day.

SMS/Debug is actually a feature that’s been available in ACC for many years. Not all companies need the power and sophistication of ACC, but many SMS installations are still struggling to debug ACS rules and figure out “Why did SMS pick THAT volume?”

In early 2003, DTS cloned the SMS debugging features from ACC and wrote a very short manual for a very simple product – SMS/Debug.