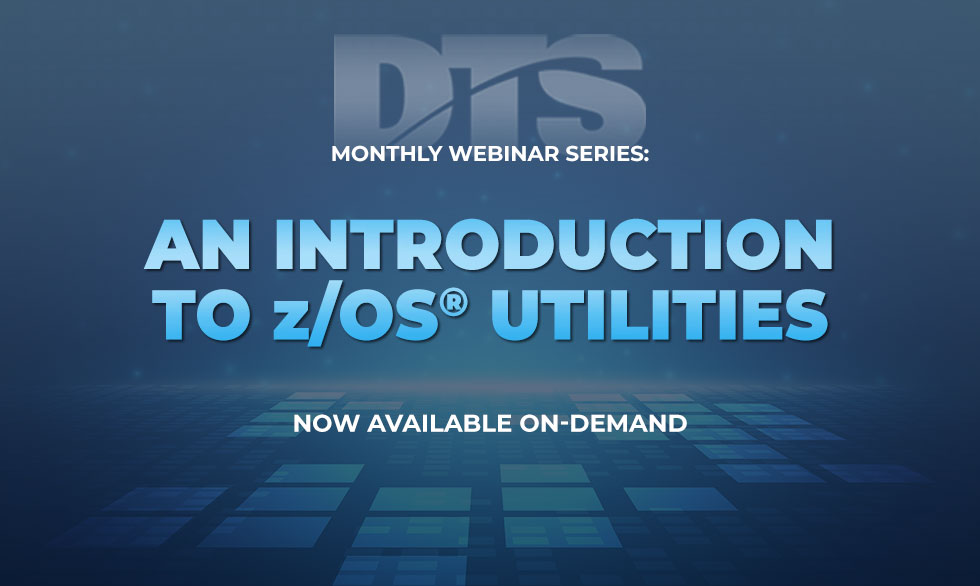 Whether you’re new to the mainframe space or a seasoned veteran, spending an hour with someone who is a walking knowledge base is never a bad idea. That’s exactly what happens each month in DTS Software’s educational webinar series. DTS CTO and z/OS storage management expert Steve Pryor covers topics aimed at giving z/OS users and programmers old and new tools to help you get the job done more efficiently and more effectively.

Users unfamiliar with a new operating system such as z/OS face a learning curve when trying to perform even the most basic functions, such as moving, copying, and comparing files, creating test data, and editing file contents. In the mainframe environment these functions aren’t always performed interactively but by specialized z/OS “utility” programs, which was the topic of our January webinar.

These utilities have a long history with a sometimes-complex syntax, and specific uses dependent on the organization of datasets, and names that are completely meaningless except to z/OS veterans. So, new z/OS users can face additional learning requirements for seemingly simple tasks.

In this webinar, Pryor discusses some of the basic z/OS utilities, such as IEBGENER, IEBCOPY, IEHLIST, and a few others, as well as more general utilities such as IDCAMS, and how to accomplish some of the same tasks interactively under ISPF. While the utility you choose depends on the job you need to perform, you can often use one of several utilities to accomplish the same task.

Utility by Dataset Type or Purpose
Utilities are often divided by the type of dataset they’re used on, e.g., a partitioned dataset vs. a sequential dataset. In addition to the well-known VSAM utilities, the OMVS utilities are particularly useful when moving data between UNIX system services and z/OS or moving files within the z/OS UNIX system.

Tape utilities are specific to tape management, and VTOC and Load Library utilities are used for viewing a volume table of contents or mapping a load library.

Utilities will also be either system-oriented or dataset-oriented and in the January webinar Pryor gives examples of each of these important utility categories as the webinar progresses.

Why are Utilities Needed in z/OS?

One reason is that z/OS was originally a batch system and a large part of what goes on is still batch-oriented, not updated interactively. So as data is created during the course of a day, it still must be updated, reconciled, and processed outside of the online system.

Batch Utilities in z/OS
Batch utilities are often considered the backbone of z/OS, and while there are many interactive functions in z/OS, Pryor focuses on the advantages of the batch-processing approach: 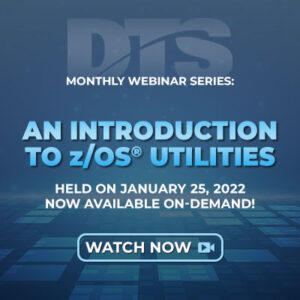 Learn More in our Webinar
“An Introduction to z/OS® Utilities” is a 60-minute informative and educational look at an important topic in the mainframe space. It includes numerous examples, how-tos, and references on where to find more information should you need it. If you weren’t able to attend, you can view it on-demand, download a copy of the slide deck, and view examples shared during the presentation by using this link.