DTS Webinar Recap: SYS1.PARMLIB: What It Is, What’s Important, and Why?

The PARMLIB dataset is arguably the single most important dataset in a z/OS® enterprise. Controlling everything from system initialization, tailoring, catalog operations, and storage management to security, automation, console functions, and more, the PARMLIB concatenation is critical to z/OS functioning.

In a recent webinar, now available on-demand, DTS CTO Steve Pryor covers the importance of the SYS1.PARMLIB concatenation of datasets. Akin to where you’d find “init files” in the Linux and open-source worlds, but a bit more complicated in z/OS, there is a multitude of PARMLIB members that touch everything throughout the system.

While he couldn’t cover all 80+ members in a single session, Pryor takes a look at some of the most important members that affect system configuration (IEASYSxx, LOADxx,  PROGxx, IEASYMxx, IKJTSOxx) and storage management (ALLOCxx, DEVSUPxx, IGDSMSxx, and IGGCATxx). In addition to discussing the PARMLIB concatenation, Pryor also talks about filtering (to handle multiple systems) and the important console commands related to some of the PARMLIB members.

When you consider that each PARMLIB member can contain anywhere from one to several hundred parameters and statements, you get a sense of the amount of information that can be contained in SYS1.PARMLIB.

Once the introduction groundwork is laid, Pryor dives into the nuances of SYS1.PARMLIB. He points out that, due to the lengthy history of SYS1.PARMLIB, you’ll often need to refer to the documentation for instruction on things like coding comments, continuations, where the end of the member is, etc. Because they differ from member to member, he also recommends caution when coding about continuation, comments, and about the end of the member.

Teaching by Example
The remainder of the webinar is dedicated to on-screen instruction. Pryor takes a look at LOADxx, IEASYSxx, IEASYMxx, a multitude of System Programming Members, and PROGxx and some of its associated statements. He then moves on to cover the most important Storage Management Members, Message Processing Members, and many more of the most important PARMLIB members.

The depth with which the topic is covered once again proves why Steve is one of the most respected experts in mainframe storage management today.

PARMLIB Reference Resources
If you need to find more reference material on SYS1.PARMLIB, Pryor once again provides information on key reference resources available for those who need it. Steve is also available via email to answer questions about this topic and can be reached at steve@dtssoftware.com. 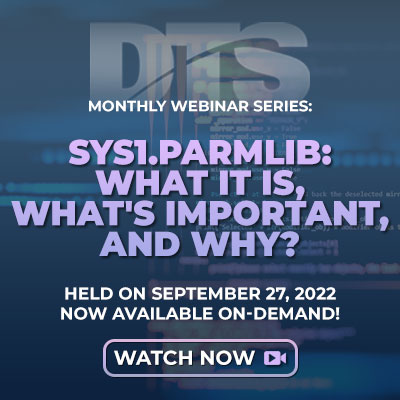 Learn More in Our Webinar Available On-Demand
As with each of our monthly webinars, “SYS1.PARMLIB: What It Is, What’s Important, and Why?” is a 60-minute informative and educational look at an important topic in the mainframe space. It includes numerous examples, how-to guides, and references on where to find more information should you need it.

If you weren’t able to attend or would like to review the material presented, you can view it on-demand and download a copy of the slide deck by using this link. Be sure to join us each month for our complimentary webinar series. Go to www.dtssoftware.com/webinars for more information.