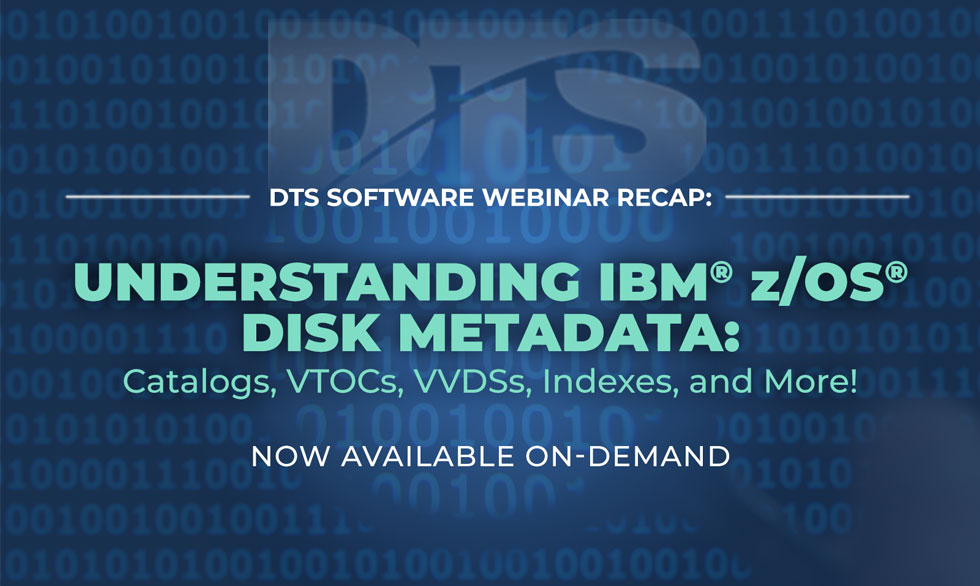 The way that DASD (direct access storage device) data is stored on z/OS is very different from distributed/open systems. An understanding of just how z/OS datasets are created, located, accessed, and deleted is as important to end-users as it is to storage administrators and system programmers.

In our October 2021 educational webinar, DTS CTO Steve Pryor discussed this important topic, and how the concepts and structures invented in the 1960s have evolved into today’s high-availability, high-performance, high-reliability disk storage subsystems.

To the more seasoned Big Iron mainframers (and by seasoned we mean 20 years or more), the information covered might seem familiar. But much of this information is no longer widely disseminated, so while it may be a good review for some, for many the concepts of z/OS disk metadata and catalogs, presented by an authority in storage management, is high-value information.

The z/OS Storage Hierarchy
At the top of the food chain is an extensive catalog that keeps track of every dataset in every volume in the system. Each volume contains a table of contents (VTOC) just like the table of contents in the front of a book. The VTOC contains information about the locations of all the datasets, as well as what space on a particular volume is used and not used.

The SMS (system-managed storage) subsystem handles all the information about the allocation needs of the dataset: physical characteristics, logical record length, performance needs, etc., and decides, given all of its characteristics, on which DASD volume to place the dataset. SMS is important to every aspect of the dataset life cycle, beginning with allocation and volume placement and extending to dataset usage, archiving, recall, and eventual expiration.

Naming conventions, which are very specific in z/OS and are critical for managing the large volumes of data common in z/OS systems, are covered in-depth during the webinar. Slides with examples of Mapping, Dataset Extents, and much more were included in the presentation.

The Evolution of z/OS Storage Systems
How did all of this evolve from the systems of old? With the development of larger, faster CPUs in the late 1970s / early 1980s came the need for expanded storage capacity.

Traditional disk drives, made up of a stack of platters in a cylinder with 56,664 bytes per track and 15 tracks per cylinder, existed well into the 1990s. Traditional drives were eventually replaced by RAID (redundant array of independent disks) drives, which were introduced in a famous paper in 1988 by David Patterson, Garth Gibson, and Randy Katz at SIGMOD. RAID simply spreads storage blocks across many different drives and lets a controller do the work of knitting them together. Not only does this make data access faster, but it also ensures the data is accessible in case of a hardware failure in a disk within the RAID due to parity blocks.  Even with the advent of more modern storage systems, z/OS still operates its storage mapping as it did pre-1980, ensuring the absolute compatibility and continuing value of software investments that are the hallmark of mainframe systems. 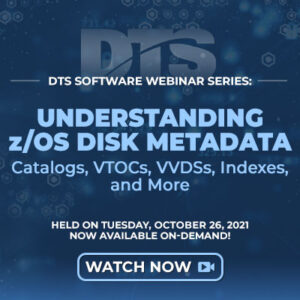 Carl Sagan said in 1980 that “You have to know the past to understand the present.” As installations grow ever larger and more complex, an understanding of how these critical legacy systems developed, and how they still operate, can inform today’s extensive data modernization initiatives.

Understanding z/OS Disk Metadata: Catalogs, VTOCs, VVDSs, Indexes, and More! is a 60-minute informative, educational look at a historic topic in the mainframe space. If you weren’t able to attend, you can view it on-demand and download a copy of the slide deck used in the presentation by using this link.