USE CASE: How ACC Monarch Can Help As You Migrate Away From Obsolete Programs 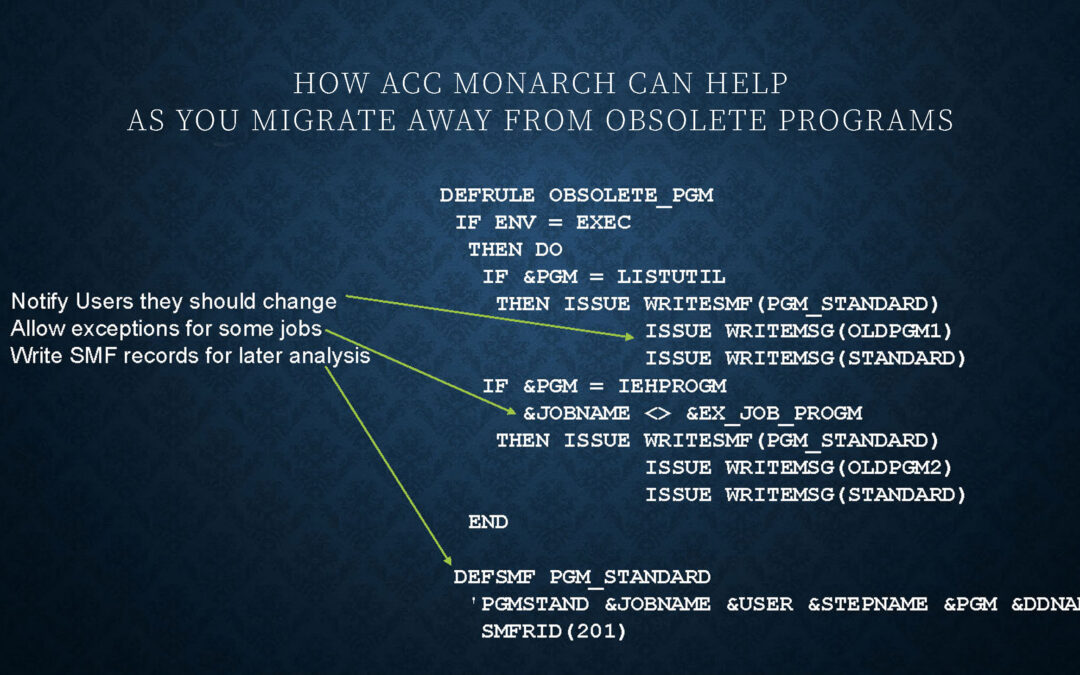 Allocation Control Center (now ACC Monarch) was one of DTS Software’s very first products, and it’s difficult to describe exactly what it does because the potential use cases are so varied. In essence, ACC Monarch enforces a set of user-defined rules, or policies, somewhat analogous to ACS Routines. The Policy Rules Engine, which acts as the enforcer, runs under the Dynamic Install Facility (DIF) Started Task. Any time a job starts, or a dataset is CREATEd, OPENed, or DELETEd, the user can examine each dataset down to the attribute level and change attributes to ensure they meet broad, systemwide standards.

Over the years, it’s been interesting to hear about the many different ways users have taken advantage of ACC Monarch. In one recent example, a customer found ACC Monarch invaluable during a migration away from two obsolete programs: LISTUTIL and IEHPROGM.

First, the customer created a rule for the two programs that would identify which jobs and users were using them. By defining a new SMF record, PGM_STANDARD, the system would record info about the job, user, step, program, and more each time LISTUTIL or IEHPROGM were utilized. In addition to writing SMF records, ACC Monarch enabled the customer to write messages to the user warning that the two programs were obsolete, and which to use instead in the future. Because IEHPROGM would still need to be used for some jobs, the customer used ACC Monarch to allow for some exceptions where the messages wouldn’t be sent.

In this case, all the variables within the customer’s SMF record were filled in at EXECUTE, offering a wealth of information about the jobs, users, and programs attempting to use the obsolete programs. Instead of sending a questionably effective company-wide email or requiring someone to pore over large quantities of JCL, ACC Monarch allowed the customer to send automated messages and pinpoint exactly where to focus its migration efforts moving forward. 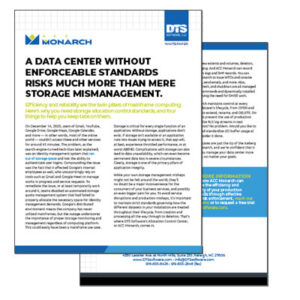 At its core, ACC Monarch is primarily used to prevent the incorrect use of resources. It ensures that production resources such as datasets, logstreams, and volumes get used on the production system while test resources get used on the test system, and it can restrict the data and time in which resources can be used. Perhaps most importantly, when allocations or usages are incorrect, ACC Monarch can intervene and correct them, saving customers the time and expense associated with manual efforts. For more information about the many ways DTS Software customers are using ACC Monarch, view our webinar on-demand or download our whitepaper today.